Managing your units is one of the most important aspects of Dusk Tactics. As the game progresses you will have the chance to manage unique story characters as well as recruit generic characters that you can customize.

You will be able to view your units in a six column, multi-row grid that gives you an overview of your current troops. Here you can sort them, manage their equipment, change and learn new Jobs, manage Abilities & Passives, and even access the inventory.

This is the current system in place as of 2021 and should represent what will appear in the alpha demo. Dusk Tactics is currently a work in progress so nothing is final. 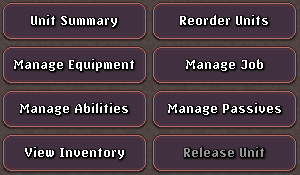 Reorder Units will allow you to sort your units via multiple different methods as well as your own custom method. This order will come into play as the first unit will be your representative unit and will appear in various locations such as shops and the Guild Hall.

You can also release a unit from here. When released, the unit's equipped items (if it has any) will be placed into your storage and they will be permanently removed. For obvious reasons, some units such as main characters cannot be removed and will have the option disabled.

The grid mentioned above will take up the majority of the screen as you will grow a pretty large army. This limit is increased by accessing the Guild and upgrading your rank. As of this writing, the player will start out with 6 open slots. 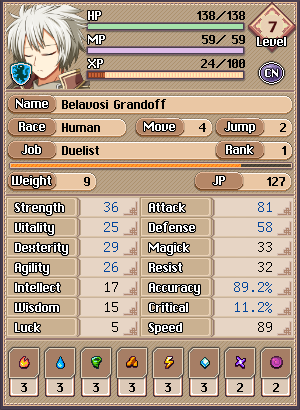 Select a unit from the grid and you'll get to see a more in-depth overview of their stats and attributes. To the left we see Belavosi Grandoff, a main character, and his current stats. These status screens are laid out similarly throughout the game, with minor differences depending on the scenario.

Every facet of this widget has tooltips to further explain both the meaning of each stat as well as a breakdown of the stat's value and calculation (if possible).

The top panel has a lot of information. From left to right we see a portrait of the character, their current Health, Mana, and Experience Points, their Level and their alignment. The little emblem within the portrait will show the unit's country of origin.

Below that we have the character's name, race, move & jump values, and the current Job and Job Rank with a progress bar for JP (Job Points). Weight is also found here. Weight is a measurement of the burden caused by the unit's currently equipped items. High weight values will slow your unit down.

Continuing, we have our primary and secondary stats. These all feature tooltips with detailed calculations which show any bonus values or modifiers. The values are color coded with the default being black. Buffed stats are colored blue while lowered stats are shown in red. In many areas where I use colors, I plan to also have symbols to help with accessibility. This will be an ongoing effort.

Lastly we have our elemental resistances. These values are determined by the secondary stat Resist, with potential bonuses being applied for each of the eight elements. These bonuses are primarily racial, but can be influenced by equipment, passives, and even status effects.

One feature I still have on the backburner is squads and squad leaders. What this system would do is split your army into smaller squads composed of six units (or 1 row). The first unit in the row would be the squad captain which you would choose via sorting. Any unit can be a squad leader, so it's not just the main characters, and there would be a bonus that they would give to their squad.

An example of this might involve special stat bonuses that would correlate with something special about the squad leader. This works better for main characters, but could be implemented by generating personality traits for generic units (or some variation of this). So we put Belavosi in charge of a squad and let's say he is an expert when it comes to the Fire Element. All units in his squad have their Fire Resistance boosted. When deployed on the battlefield, the leader would need to be both present and currently alive for the bonus to be active. Not all squad members need to be deployed, so if there were 10 slots open, you could potentially have 3 squads represented. Three squad leaders, with the other seven being units from any of those squads. Of course you can deploy however you like and choose not to take advantage of the bonuses.

What makes this idea intriguing is the ability to allow units to form bonds by being in the same squad and fighting together in battles. Maybe this could bring some mini-scenes into the mix, or allow units to gain an increased bonus by remaining in the squad over time. I'd really like to tie in some story and lore with this system, basically using it as a framing device for background information, comic relief, and what have you.