A unit will navigate the battlefield maps using their Travel Attributes. These include Move Type, and the numerical stats Move and Jump. While Move and Jump are straightforward indicators of distance and height, Move Type gives these values a set of rules to follow to allow for variations in movement for different units.

This is represented as a number value to determine a unit's range of movement horizontally across the map. The higher the number, the more distance the unit is able to move in a single turn. A move value of 0 would mean the unit is unable to move. This value does not translate directly into the number of tiles a unit can move as you will see below, things such as Terrain Types come into play which limit movement.

Similar to Move, Jump is simply the vertical range of movement a unit can move during a turn. Simply put, the value determines how many tile heights the unit can “jump” while moving.

It's important to note that the map is a tile block map, made up of tiles stacked into columns. Every tile is the same width, length, and height. We define each tile as having a height of 1 unit. The Jump value corresponds to this value but other factors are involved.

It gets a bit more involved when dealing with whether or not the unit is ascending or descending. When the unit is on the higher tile and it is jumping down, they are afforded an extra +1 height to their Jump value. 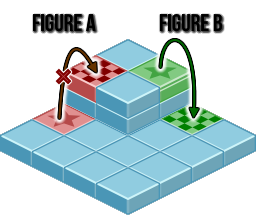 The image to the right shows an example of this given the unit has a Jump value of 1. On this map we see Figure A, the red tiles and arrow, showing the current position of a unit, the red star tile, who wants to jump upwards to the red checkered tile, which is not allowed. Meanwhile in Figure B, the green tiles and arrow, showing the starting point of a unit, the green star tile, who is jumping downwards to the green checkered tile, which is allowed.

This system will affect your strategy as the tiles themselves will not all be uniform blue tiles, but they could be grassy plains, thick mud, hard stone, or even water!

As of Version 0.6.0a, there are ten (10) different Move Types, each made up of combinations of Land, Water, and Lava Move Sub-Types.

Movement is restricted to land only. On land, all movement costs higher than 1 are doubled making terrain harder to traverse.

The most common movement type. Land movement is average with movement costs unaffected. Unit is able to Wade through shallow water and Swim in deep water. Unable to move on or across Lava tiles.

Movement over Land is enhanced as the Unit is able to use the Nimble Land Move Type which halves any tile's movement costs if it's over 1. Both Water and Lava Move types are the same as Normal.

The quickest movement type, uses the Nimble Land Move Type which halves any movement costs over 1. Lava Move is the same as Normal and Agile, however Water Move Type is set to allow for Water Walking. Regardless of the depth of the water, the unit treats it as if it's normal land and simply walks across the surface.

A special Move Type usually used by apparitions and other floating entities. Hover is unique in that it allows for the same movement type regardless of whether it's Land, Water, or Lava. The limitations of Move and Jump are still taken into account as if the unit was walking normally. The unit may hover over any type of tile. When hovering they are considered to be 1 vertical unit in height above the land they are over. Lastly, the unit gains immunity to any abilities that require the target to be on the ground.

This movement is almost always used by a unit who possesses wings but some magic users can also use it. This Move Type may seem similar to Hover, but it has many differences. First off, there is no vertical restriction. The Jump value is no longer calculated when flying. Second, while the unit can fly over Land, Water, and Lava tiles, they are unable to land on Water or Lava. So while they are free to travel within their Move range, they are unable to end their movement on Water or Lava tiles.

A very special movement type often used by those with Magick abilities. Water and Lava tiles are completely inaccessible, but when it comes to Land the unit is able to instantly travel to any tile within their Move range. When moving the Jump value is ignored and they only ever touch the destination tile.

This is one of the rarer Move Types that is usually applied to specific races. Land and Lava movement not possible as the unit may only Swim through water tiles. It is one of the more restrictive movement types.

Another rare Move Type, Amphibious is nearly identical to Aquatic except the unit is able to move on Land. They are very restricted on Land as they have the Rigid Land Move Type causing the movement cost of any tiles with a movement cost over 1 to be doubled.

A rare Move Type used by Lava dwelling races mostly. Similar to Aquatic except access to Land and Water is removed and the unit can only Swim in Lava. This is the only Move Type that can actively move in Lava.