If you've played SRPGs or Turn Based Tactical RPGs before, most of this will be familiar. Over the past two decades I've played hundreds of games in this genre and have compiled my favorite features into a list. I then went about creating the best experience from that list, so while not everything I wanted has made it thus far, I can always add more in patches later.

This is a large system that includes everything related to unit management. This includes, but is not limited to, Stats, Race, Gender, Resistance, Conditions, Alignment, and more.

While this would fall under the Unit System, there is a lot of detail here so it will have it's own page.

This system details both the basic and advanced elements in the world of Dusk Tactics.

I tried to find a better name for this system, but “time of day” seems to be what it's most often referred to. While the game will have it's own Calendar system, that's more for lore and less pertinant to actual gameplay. So when we're talking time of day, we're talking Morning, Noon, Night, or as I like to call them Dawn, Dusk, and Night.

Now I probably just blew your mind as the game happens to be called Dusk Tactics, well there's multiple reasons for that and this is one of them!

Some of the best games in the genre sometimes leave out things like weather, while others may include it, it is usually just a visual effect and nothing more.

Tactics Ogre has an excellent system that immediately caught my attention and got me hooked! So weather is definitely going to play a big role in the game.

Dusk Tactics will have a living “atmosphere” that will be constantly changing and affecting things like elemental abilities, ranged accuracy and more.

Weather is a primary part of this atmospheric stsrem and will be a visual experience as well as a strategical one. Weather will also have multiple stages and types that you'll want to keep an eye on!

This is the third piece of the “atmospheric system” and it details the actual land your units will be standing on. Terrain takes many different forms and can often be discerned visually. There is an in-game UI widget that will give you basic information on whichever tile is currently selected. This includes the name of the terrain name, movement type, and bonuses to accuracy and damage (for those attacking from the terrain). It will also include elemental properties.

The game world is purposefully made of tiles, i.e. a tilemap. These tiles are stacked and even if you can't see them, they are there, under the ground. Again this is on purpose so that any possible alterations of the map will look and feel more realistic. There are Jobs that take advantage of terrain and use it as a weapon, or to enhance an allies abilities.

Terrain will also determine how a unit is able to traverse through a tile. While most tiles are solid, some consist of liquid such as water tiles. These have a water terrain setting that allows certain units, depending on skill and ability, to swim and even walk on water!

In this game you will be exploring the world of Gaia through the World Map which details every important location using a node path traversal system. 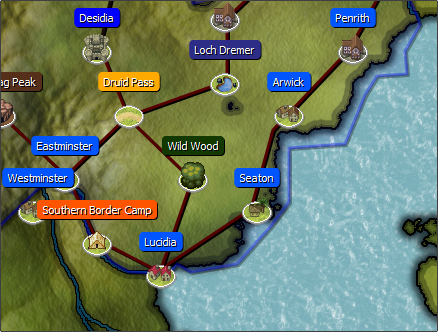 To the right is an idea of what the Country of Acedia looks like on the World Map. The locations may not all appear at first, but as you explore and continue the story more locations will be revealed. The names and locations of these places may change, but so far much of Gaia's countries and towns have been established.

The icons used may still show placeholders, but I have begun transitioning in some official art and will continue to do so. Please do check out the Resources page to see more information on the various artists who have contributed their art to the community on sites such as http://opengameart.org.

Each icon represents the type of location. The more developed and numerous the buildings, the bigger the city!

If you look towards the center of the image, you'll see a castle. Icons like this are usually places of importance such as capital cities. The capital city of Acedia is Desidia. Desidia is known as the Mountain Citadel as it was built at a very high elevation with ornate buildings and a giant fortess that tend to go against the rest of the nations rather lackluster appearance. 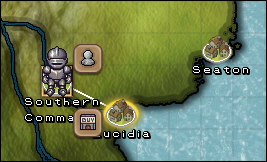 As mentioned previously, you will move around the World Map as a small militia. Your current location will be represented by a sprite that resembles an armor clad warrior (subject to change).

You can move to any connected location as seen by the white line, and once you are on a location node a more localized menu will appear. This menu will let you visit the area. While this is somewhat limited in places like Forests or Caves, there are many places to visit in Towns! Every Town has different ammeneties including Shops and Guild Halls.

You may also notice that the southern town, Lucidia has a yellow hue around it. That is to designate where the story continues. When visiting these highlighted nodes, you will have the special option to 'Visit' which will progress the story.

As of the latest version, there are several different options on the Town Menu. Each option will usually take you into a shop to do business, or into the local pub to hear rumors. Recruiting at the Guild Hall is very important to bolster your forces. All shops will have different wares based on where they are located, so be sure to check around.

Item Shop
Purchase consumables here such as Potions and Supplies.

Blacksmith
Purchase Weapons and Armor. Upgrading items might be added in the future.

Guild Hall
Recruit new units for your group. Units and Jobs vary based on location.

The story is very important to a game such as this. How it's told as well as it's contents are both systems that need to be handled with care. I have put a lot of time into the background lore of the land of Gaia. It's people, nations, and continents have seen thousands of years of history before you even step foot in Acedia. This lore will be positioned so as to compliment the gameplay in places.

On the World Map, you will see some information in the upper right hand corner of the window. This will include the current date using the Gaian calender system. Mendas Tetra 8th, 996 is the starting date of your journey. Mendas being a day of the week, Tetra being the fourth month in the year, and the year being 996.

Other information, such as the current size of your army and how many Guilders line your coffers will keep you up to date as you traverse the world.

Guilders are the official currency of Acedia and many of the nations on the Northern Continent which the majority of your time will be spent. You will use this resource to purchase contracts for new units, to outfit your army, and to see to it that your supplies do not run out. How you gain money is up to you: Completing quests, story missions, or just picking the pockets of your last battlefield victim. Asset management is crucial in times of war.

The story will play out in scenarios that are grouped into Chapters. A Chapter encompasses relating scenes and battles. Scenes will play out like in most Role Playing Games. This game is not a Visual Novel with some gameplay tacked on, but there is a good amount of dialogue. It's nothing close to the Utawarerumono Mask series of games (very fun games by the way), if anything the ratio is flipped, so there's more gameplay.

You will meet many characters, some of which may join you and some may oppose you. You will have an ever growing cast of unique characters as well as characters you hire through Guild Halls. Recruiting units is pretty much a character creation system with some limits, but we'll get to that later.

The alpha demo will have very little if any dialogue or scenes, it's focus will be gameplay specifically combat and unit management.