Emma was born to a Trip and Remy Slate. Unfortunately her mother died during childbirth, which devastated Trip, but he turned that into affection for his newborn daughter who he swears is a spitting image of Remy. While she never got to know her mother personally, her father made sure to share his wife's story with Emma.

Like many Slate's before her, Emma grew up in a military family. The Slate family had served with the Acedian Armed Forces (AAF) for at least four generations. Her father, Trip Slate was an up and coming officer who had become a Lieutenant at a very young age. He was extremely wise, and very kind. He spoiled Emma however much he could on the low paying military wages.

Her mother, Remy Slate, was a renowned Archer. Her family specialized in recon and ranged fighting tactics, so this was expected, but her mother was something special. From a young age, Emma decided to forge ahead with her mother's will, and she started training with a bow as soon as she was able to hold it.

Emma became very skilled with the bow and by the age of 8 had won most of the local Archery competitions however she tends to only remember the few she didn't win. Her father saw how hard she was on herself and tried to temper that, but found it difficult to pull her away from training.

As soon as she turned 12 and was eligible for the junior page program, where potential talented youths would begin to learn the military lifestyle, she demanded to shadow her father. It wasn't unheard of at the time, however it was usually done at the age of 16. Emma, who was extremely well read in military law, of course knew about the age being 12 and her father was not winning an argument with her, so off she went.

Many of the officers she met would be rather stiff and she would often be brushed off. She realized, rather quickly, that her father was not the norm. He was warm, friendly, and extremely humble with a powerful aura about him. He was also exceptionally talented with recon and ranged weapons. While he made Lieutenant rather early in life, he found himself stuck there for various reasons. It didn't bother him much, but Emma couldn't help but learn first-hand what was happening and it definitely angered her. She saw that not only was the military a “boys club”, it was a “noble boys club”. Rather than the more talented people moving up, it was often those with connections who received the promotions. She wondered why her father wasn't more ambitious, witnessing a number of times when a potential promotion was within his grasp only to be handed to someone else due to what she saw as a combination of her father's disinterest and the commanding officer's neglect of duty.

This resonated strongly with her, she wanted to break this system from the inside, and make it more like the meritocracy she had heard about when hearing stories of her mother. Her father of course left out a lot of the hardships his wife had to endure, many of which would later plague Emma herself.

A little over a year into working with the AAF her father was assigned to oversee a potential recruit. These were special talented individuals who the AAF was actively seeking to enlist. Emma learned over the last year that these recruits were very rarely talented and just happened to be the son or daughter of some higher up.

To her, this recruit was no different. A seemingly listless 17 year old with little to no ambition and a bleak outlook named Alton Alstair. The name Alstair was well known, his father was a General and a powerful one at that. However, when Alton spoke, his words rang true and honest. He had also made it clear he wanted nothing to do with his father, and Emma learned that he could have easily worked with someone much higher up the command chain, but specifically chose her father. She didn't let it show, but she saw something special in him.

That isn't to say they got along, in fact it was quite the opposite. Lieutenant Slate often remarked how Alton was like a big brother to Emma who hated the idea that he'd be the elder (even though he was in fact older) due to his lax demeanor and laid back attitude. An attitude that, to Emma, spit in the face of the military. Surprising even herself, she came to quietly respect this attitude and he would often speak out on the injustices that Emma saw on a daily basis. This was the first person she came to truely respect besides her father, however she hadn't realized this until later on.

Emma was fascinated that someone “her own age” (she'd often say this despite Alton's claims that he was almost 4 years older than her) was more than ready to enter the military, something she dreamed of doing much to her father's dismay.

Emma tried as hard as she could to enlist before the war but was unable to. She spent the entirety of the war in boot camp much to her father's delight.

While Emma was unable to participate in the war, she took her training regiment seriously. She quickly reached the highest ranks of a NCO and was essentially waiting to show Alton, who at the start of the war was a Sergeant, that she had reached his rank in half the time.

Of course Alton had somehow ended up a decorated war hero and was promoted to Lieutenant, giving him his own platoon and ruining Emma's plans. She quickly realized this was a blessing in disguise as she petitioned to be Alton's First Officer. In six months time, she was basically running Alton's command, doing the job of a Lieutenant, which she took great pride in. 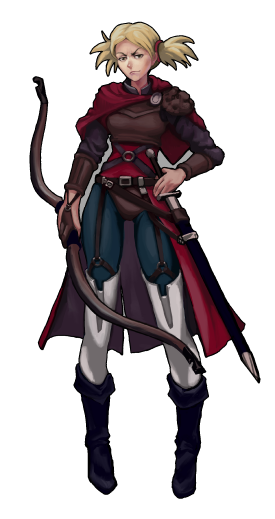