To help develop a simple but effective GUI we will layout the components required for display during various game modes. As of right now this game is being designed for PC, android mobile devices and tablets. The end goal being deployment on all modern Android cell phones and tablets. 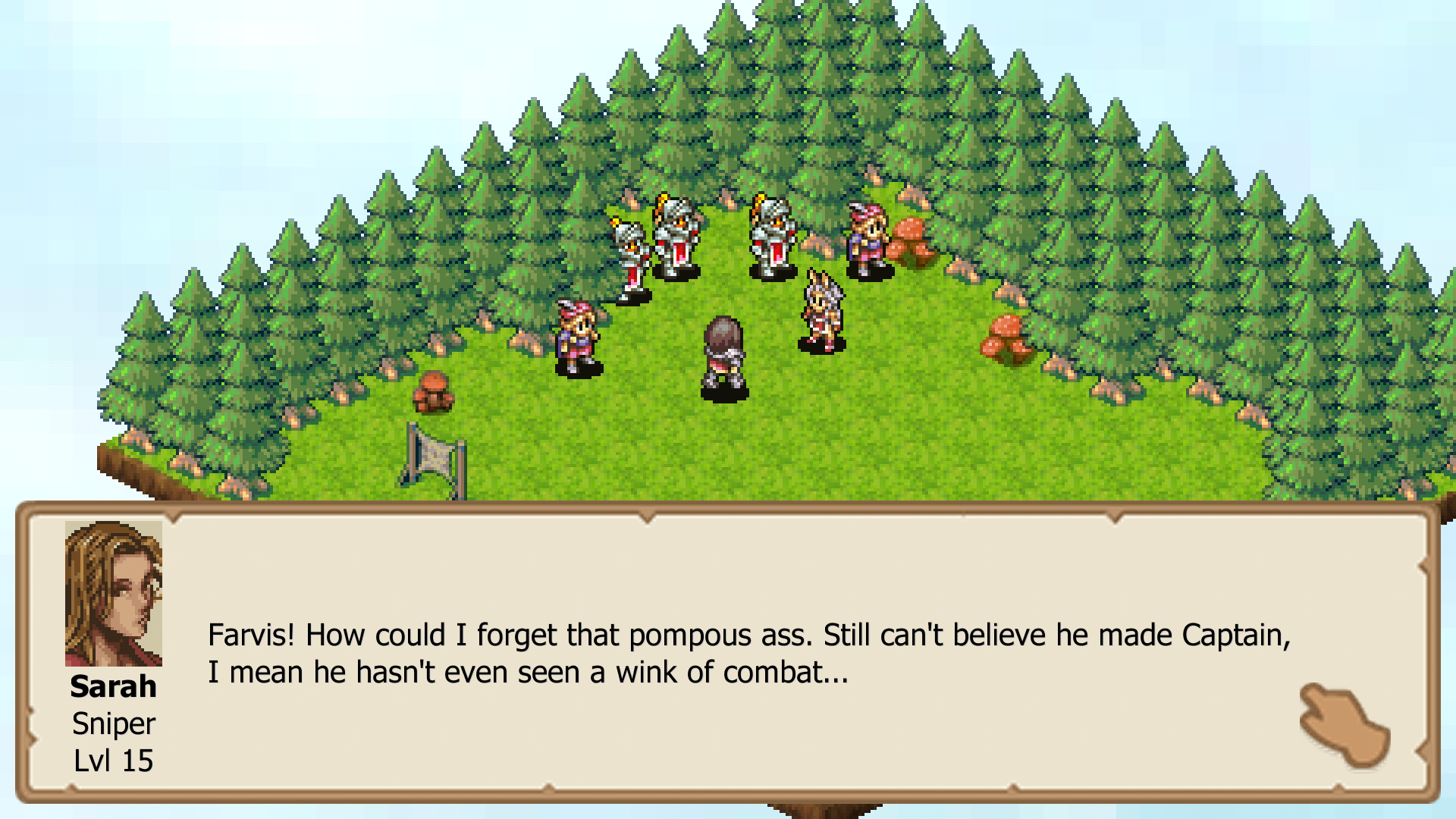 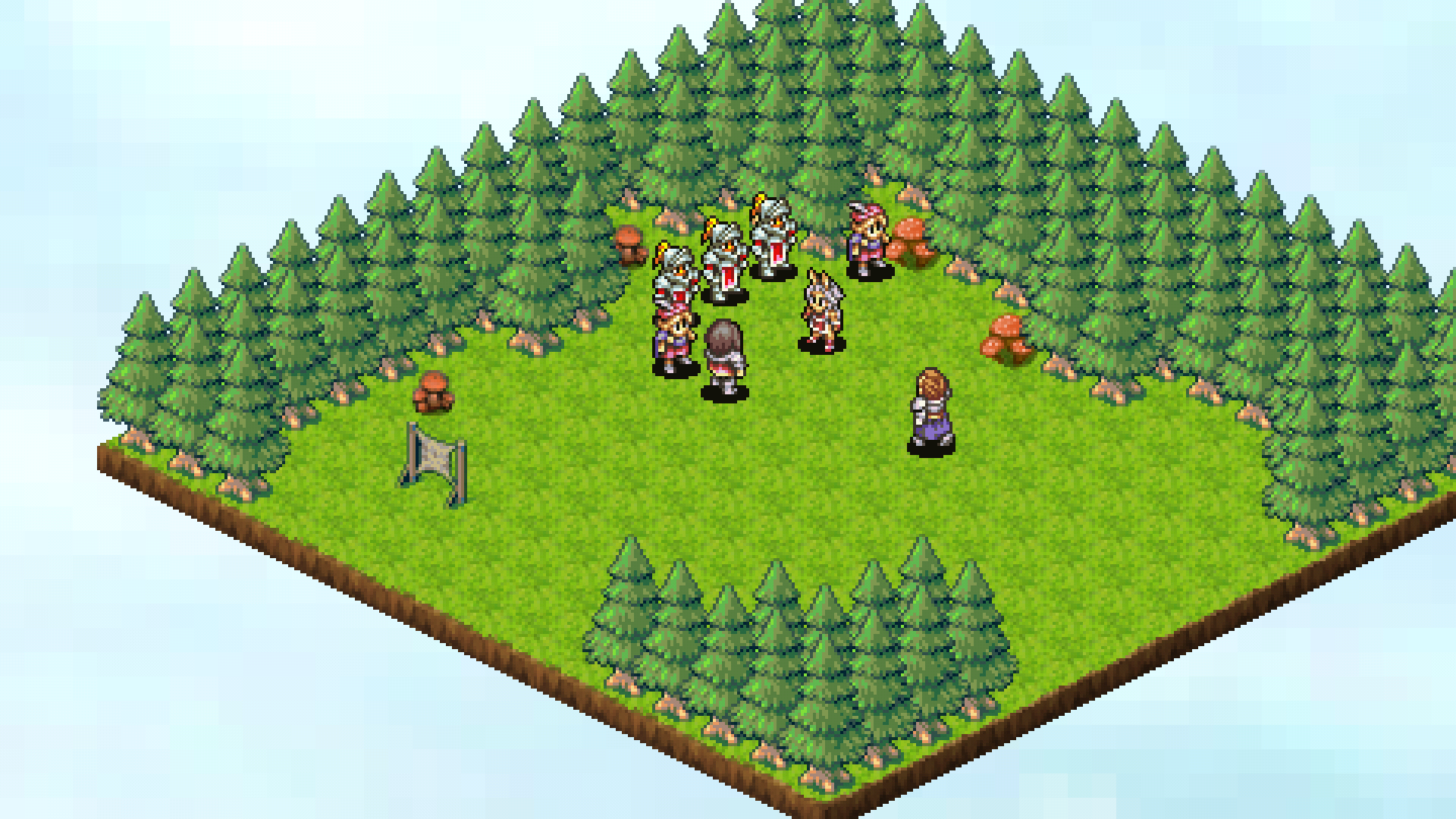 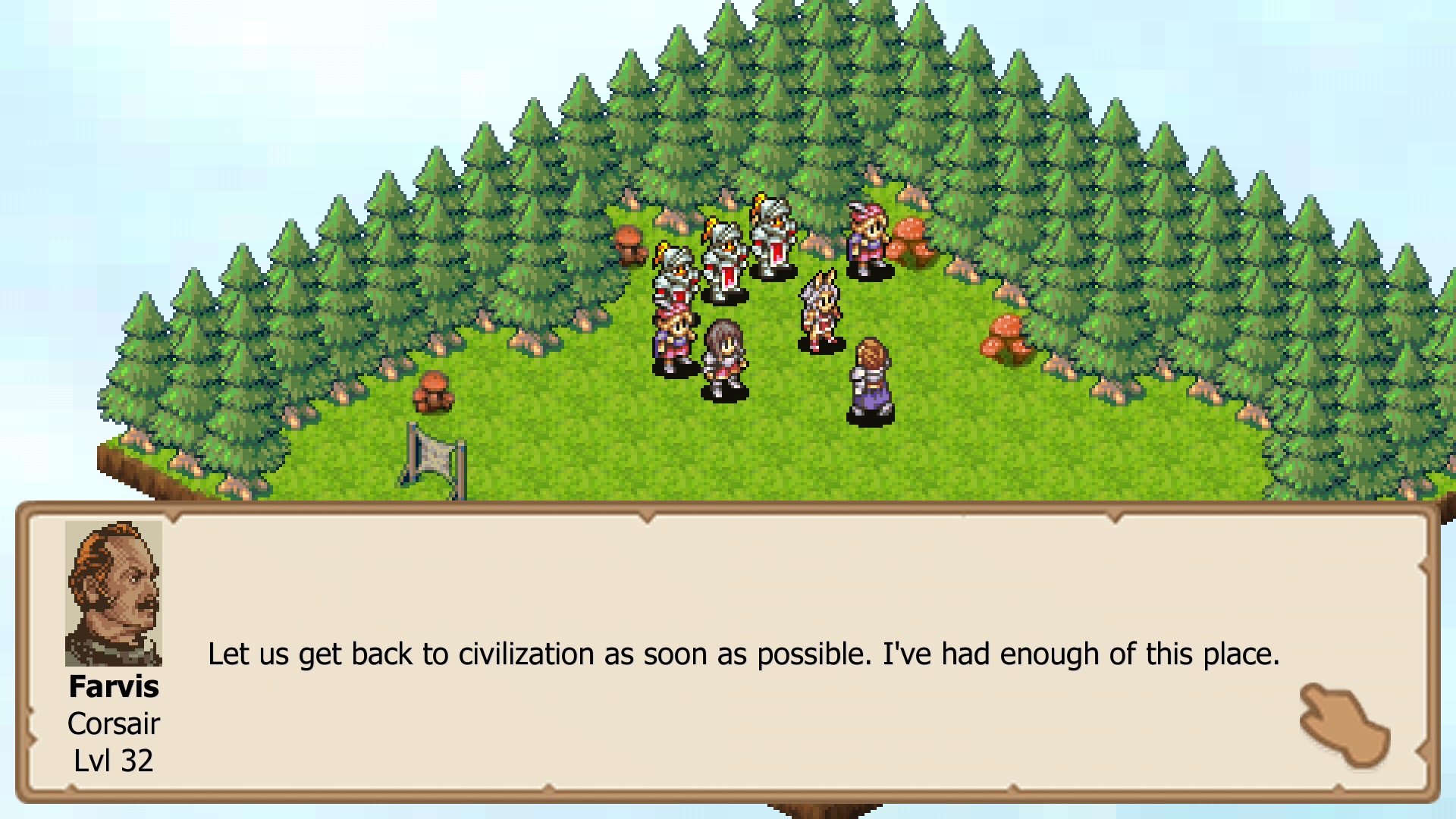 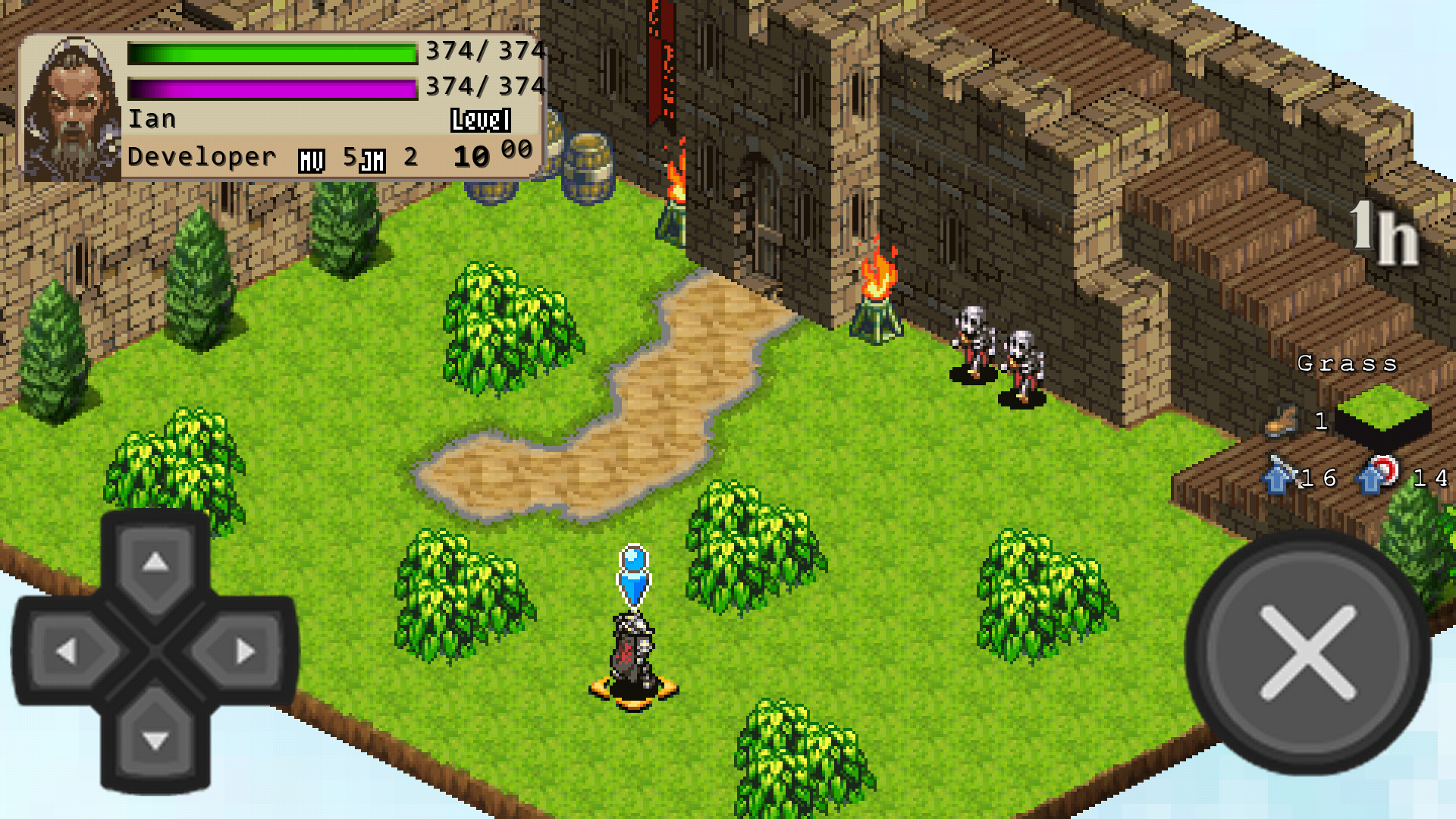 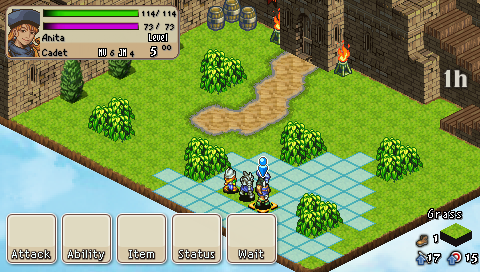 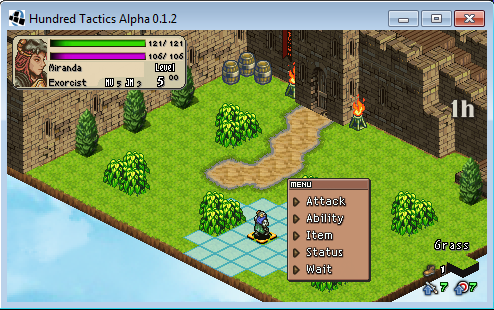 The window refers to the entire frame of the game. Everything will be placed inside this rectangular shape.

Currently the aim is for a 640p x 480p overall size with the active screen being 320p x 240p. For devices with a smaller resolution than 640×480 the surrounding images and graphics can be scaled down. Keeping the minimum size the same as the active screen (where 99% of the game takes place) which is 320×240 will allow whatever needs to be animated free from scaling. 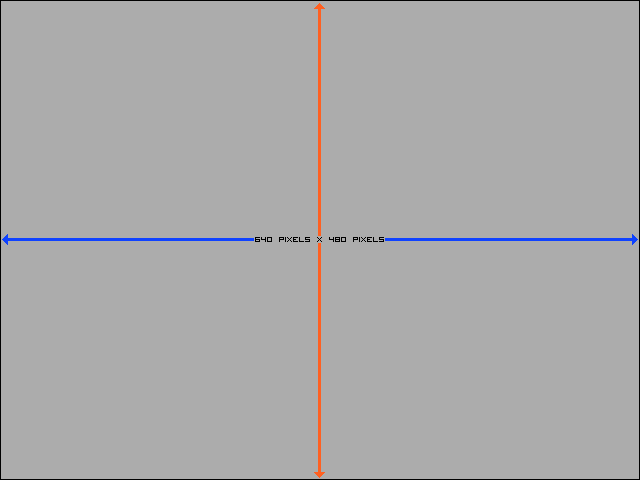 The screen is the rectangular window in which all the visual aspects of gameplay take place. 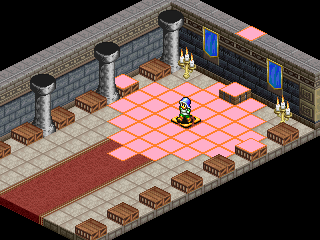 This is a fixed 320p x 240p area where the active battle area is displayed. All of the action including movement, combat, abilities, and more will take place in this area. This part is already created by the action occurring during gameplay so no further decoration is needed beyond an optional border. 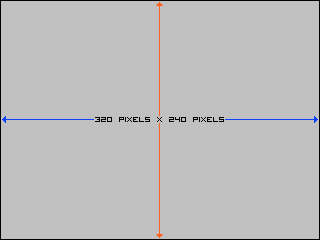 This refers to the location that the Screen will be placed in the overall Window. As of Version 0.0.7a it is located in the center horizontally and toward the bottom vertically. The unit command buttons are placed directly below it in between the edge of the screen and the edge of the frame. 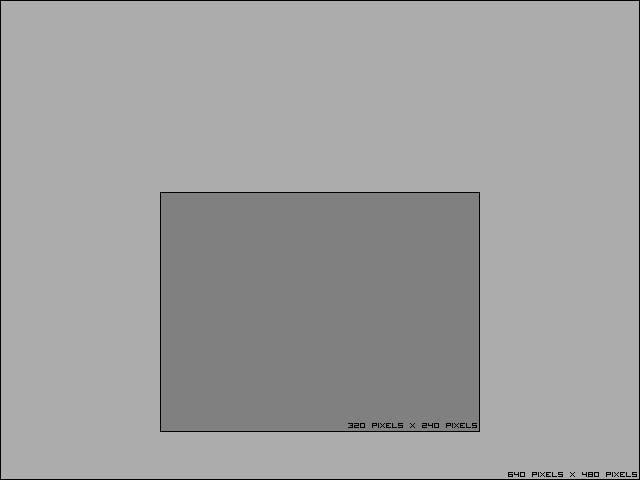 This box features a quick way to see basic stats of a unit. These stats are the most relevant to basic actions like moving and attacking.

Shown for friendly units are four graph based attributes, Health Points, Magick Points, Action Points, and Experience Points. The unit's Level is shown as the largest number in the upper right hand corner of the box. The Move stats and Jump stats are located on the lower right side of the box. Currently this is separated from the main box as allied units have their Experience Bar displayed across the bottom.

Enemy and Neutral units have all the same information displayed except for experience.

Below is the bare interface for Dusk Tactics. The screen that displays the game world is a fixed 320×240 with the surrounding area being filled with information panels. This is for version 0.0.8. 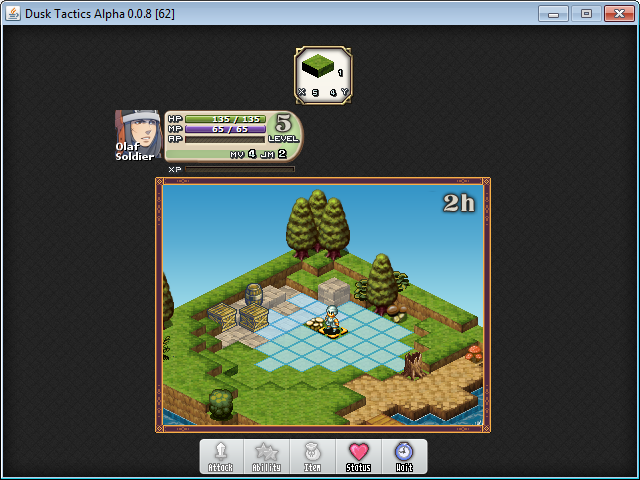 This displays a unit's full stats, conditions, resistances, etc. It's currently only partly done as more information will be added, namely text values under the various bars and elemental alignment values among other things. 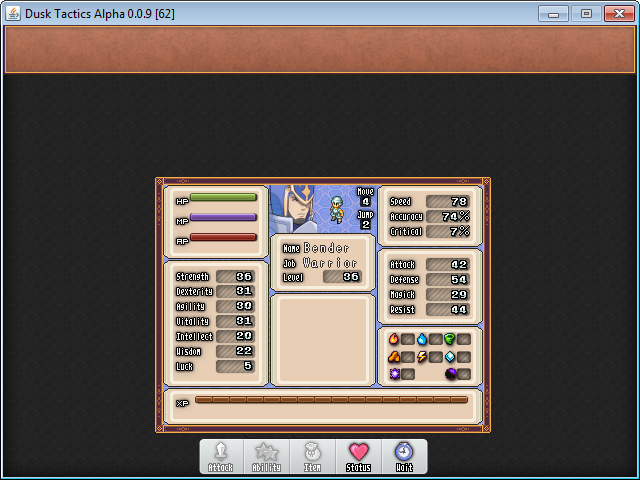