The game itself centers around combat which is handled like many other turn based tactics games. For those unfamiliar with tactics games, the flow of gameplay is discussed below.

At the start of the battle the player's units are assembled on the starting tiles for the map. Enemy units will be assembled on the map, usually in a defensive position. As of version 0.1.3 the maximum amount of units you can deploy is nine (9). This number will definitely change, the goal being to allow a maximum of at least twelve (12) units from your army on the battlefield at any time.

With both armies setup, any story related events such as dialog will be displayed. If there is no event then battle begins.

The first unit to act is determined by the unit's Speed stat. The higher a unit's Speed, the sooner it may act. A turn ends when all units on the map have acted. When the turn is over, the cycle begins again and every unit gets another action again based on their Speed stat.

When it is a unit's turn, the game will focus on them. The unit now has the ability to act. This includes moving around the map as well as performing an action. Moving around the map uses the unit's Move and Jump skills to navigate the terrain. The Move stat determines how far a unit can travel while the Jump stat determines the restrictions on vertical movement over the map. The choices a unit has either after or before it moves are to Attack , use an Ability , use an Item , or Wait .
At the end of the unit's turn you can decide which direction the unit will face. This is important as getting attacked from the back or side can do more damage. Note that the unit does not have to move or perform an act, it can end their turn instantly and select a direction to face by using the Wait command first. 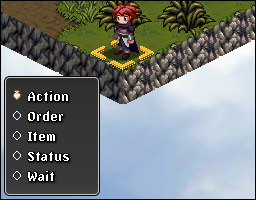 During your unit's turn you can move the unit around the map. Along with this you can perform actions with your unit. You can also undo most actions, should you make a mistake. Some actions cannot be undone, specifically actions that effect a unit's stats such as Attack, Ability, and Item. Also, Wait can only be undone before you confirm it. 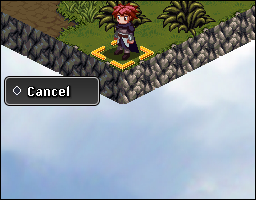 As of Version 0.6.2 the choice has been made to use a “pop-up menu” that will appear below the unit. This menu will give the battle command options and upon selecting an option, a sub-menu will animate outward. All of the menus will function like this. The Cancel button has been moved to it's own menu, and when it is needed it will simply show a menu with one option “Cancel” which will undo the last action.

Move is not an option on the battle menu, your unit will default to movement when their turn begins.

The area which a unit can be moved will be highlighted in blue. The move command is the default action and will always be active until you move. You do not have to move during a turn. It also does not matter if you move before or after acting. There are situations where you will want to move in close to an enemy unit and then attack them. After you move you will have the option to undo your choice by selecting the Cancel command. You will not be able to undo a move if you attack AFTER moving.

This will bring up a sub-menu displaying your unit's basic actions which usually include both offensive and defensive choices. One average a unit will have three (3) basic actions including a basic melee attack, a basic ranged attack, and a defensive action.

Actions do not require MP to use, and depend entirely on what your unit has equipped in their Main Hand and Off Hand. That being said, the Action menu is very dynamic and has multiple variations. 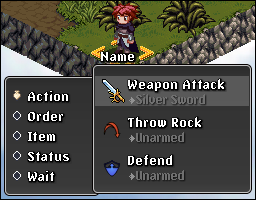 Pictured on the left, Alton was kind enough to show us his current Action Menu. As you can see, he has three choices: Weapon Attack, Throw Rock, and Defend.

Under each option is the equipped item that will be used to carry out the attack, in the event nothing is equipped, it will simply say “Unarmed”.

He is currently equipped with a Silver Sword in his Main Hand, this is a one-handed melee weapon. He has nothing equipped in his Off Hand, meaning no Shield or secondary Weapon.

Alton may strike a nearby unit with his Silver Sword, throw a rock over a small ranged distance to get a unit's attention, or decide to go into a defensive mode which will give him a Defensive Buff until his next turn.

For a slightly different take, let's see what Emma's current Action Menu looks like. Emma's unique class is a Sniper which is known for being extremely proficient in the use of ranged weapons, particulary Bows and Great Bows. 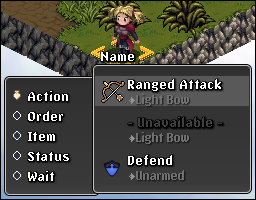 The menu looks a bit different. We only have two options as the middle one says “Unavailable”. This is due to her equipped Weapon, the Light Bow, being Two-Handed. Her first menu option is also different from Alton's. Her “Ranged Attack” is a weapon based physical attack and when selected it will display tiles within the weapon's range that can be targeted.

As far as ranged weapons go, they do not always have a minimum range of 1, meaning her Light Bow cannot hit enemies directly adjacent to her which I will discuss more below.

Lastly, she has the same Defend option as Alton.

Something we see above is how even the basic Action Menu will vary from character to character. This is entirely based on the decisions you make when outfitting your army.

Obviously not every Weapon is the same. But it goes further than simple melee vs ranged Weapons. Even within the 1 Handed Sword category, the menu option might not always be “Weapon Attack” as some Weapons may give you different actions.

When a Weapon or Shield is equipped, the action will be modified to accurately represent the item both visually via the dynamic icon display which will actually be an icon of the item, and mechanically in terms of what the action actually does. For example, a Flame Sword will make the Weapon Attack a Fire based melee attack. This will deal extra damage to enemies weak to Fire and can cause a burning status effect.

Strategically equipping and using these actions can be extremely beneficial at times when you have low MP, or require some out of the box maneuvers. Let's say Alton had a Sword of Light equipped. The Light element typically heals members of the Human race. In this instance Alton could then target allies and heal them with his “attacks”.

A unit's ability is dependent on the unit's class. When using an ability it is essentially the same as an attack however the target might be different. For example an ability can heal an allied unit, or it might be a damaging magic attack that has more than one target (Area Of Effect abilities, or AOE). The ability system is still being developed. The amount of abilities available to a unit is currently one (1) and is different for each class.

Updated for v0.6.0 abilities can have many different effects on units. To the left you will see a gif of the ability known as Rush, an ability that a Page learns. This ability not only does damage, but it knocks the target forward 1 tile.

In this example the Page is attacking any ally unit, which is something I want to make sure is always an option. Almost every ability/attack can target pretty much any unit and some can even attack the environment and objects around it.

This will show the complete stats of the unit. Status can be shown as many times as you want and it can be closed by selecting Cancel. 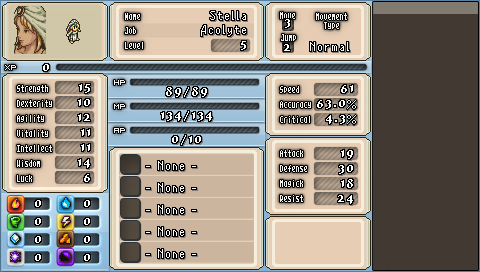 When the unit is ready to end it's turn it uses the Wait command. When using this command directional arrows will appear around the unit. At this point you can select which way you want the unit to face. This command cannot be undone once you select a direction to face, it will also end the unit's turn regardless of whether it moved and/or acted.

Appears when there is the ability to undo something the unit has done that turn. As described above, some actions cannot be undone, and some have restrictions on when you're able to undo them.