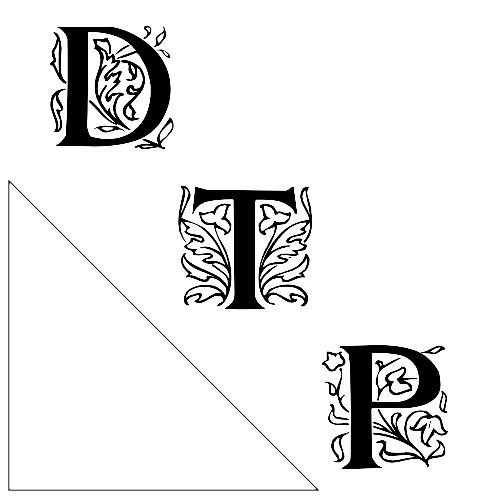 Since this is a solo project, for now I will be using a placeholder company name entitled “Dusk Tactics Project”. This is to be used in place of a development company name until I create a proper LLC.

“Dusk Tactics Project” or DTP was founded in 2011 when the idea first came about to create a tactics role playing game. CTP management is known as “The Boys Upstairs”.

The goal of DTP is to not only start, but finish the process of creating one (1) Dusk Tactics game. As someone who has been playing video games since I was a kid, my favorite genre was always tactical rpgs and there was never enough. With a background in programming, I decided it was time to create the game I always wanted to play.

The logo to the left was painstakingly crafted over three years by fifteen artists and a carpenter. We decided on using the letters D, T, and P to represent Dusk Tactics Project. The triangle in the lower left symbolizes a triangle, the only true shape known to man.

Dusk Tactics is an independent turn-based strategy game, or (SRPG), that was workshopped and outlined in 2013 and has been developed mainly for the last 2 years. The game and underlying engine are coded in Java 8 with JSON scripting and use of the libGDX gaming library.

The game has a 2D isometric style reminiscent of older handheld and console RPGs and SRPGs such as FInal Fantasy Tactics, Tactics Ogre, Disgaea, and more. While not truely isometric, it's what is referred to as “video game isometric”, it enables the creation of a pseudo-3D environment using only 2D elements.