With the game now being tested on Android, and being playable, I have moved forward and set up some short term goals. I would like to have a playable demo, which would include a sample campaign map. This consists of a playable map with a story behind it, and dialog from characters explaining what you're doing in the map. It's not yet known if this will be a tutorial style map, or just a playable bare bones map. I'm leaning towards the latter as the goal is not to teach people how to play just yet, but more to see how everything runs. You need to have a game first before you create a tutorial for it.

For those of you who are not familiar with this genre gameplay usually goes like this:
Story/Dialog → Army Management Screen → Playable Map The story part will explain what's going on, and give the introduction to the playable map as well as explain it; i.e. why the units are there and what the purpose is for the map, like victory conditions. The Army Management part will come before you start any map. This will allow you to adjust your units, change gear, use services such as buy/sell and hire units. This three part system will be the baseline for the game, but there might be times where you play multiple maps in a row, or you see more than one story screen. No matter what happens though, this above routine will be followed.

These various terms, map, story, dialog, will all be separate screens that form the game itself. To start this, I have created a dialog system. This system will be used to tell the story in between battles. It is an important facet in gaming, the story, and how it is told is also important. 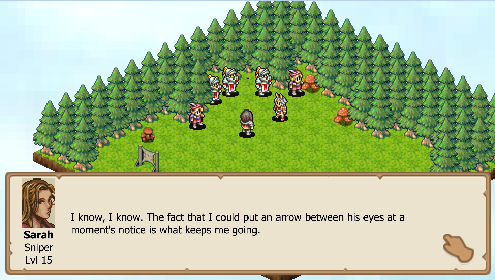 In this screenshot, which was taken from the laptop (so ignore the badly rendered font, and blotchy pixels, these don't appear on the phone), we can see a map, with units on it. These units are actors on the stage and they will tell a story. They can move, and animate, and more. Whatever is needed to tell the story. 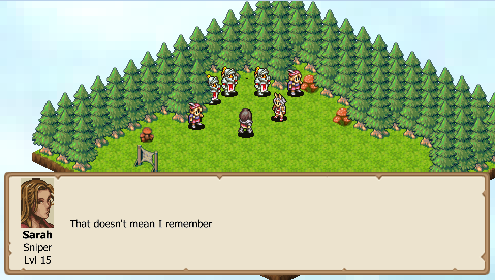 This screenshot shows how the text shows up letter by letter.

Dialog System
Note that you are unable to see the animations in this image, I'll try to upload a gif at some point, but basically the text will appear on the screen one line at a time ala classic rpg style. I also plan to add a sound, similar to that in Final Fantasy Tactics, when dialog appears. When a unit is talking, they will be animated, so you know you it is. This is a very early stage of what it will look like. I plan to make the unit portrait and name more “together” with more information such as character level and possible HP/MP bars. Also the text will be at the top of the dialog box and be left justified. The difficulties with this lie in making sure everything remains in a relative position regardless of the size, the scene2d.ui library in libGdx is great for this, however it's been a steep learning curve.

Resources
The resources seen being used for the dialog, the background, and the hand icon in the lower right corner are by the artist Kenney. I want to thank him for the wonderful resources. I plan to use more of them in the game, and honestly it wouldn't be possible for me to have gotten this far without him and people like him who support independent game development.