After a short hiatus production on Dusk Tactics continues. After cleaning up some recently added code one of the bigger problems, handling units walking on tiles with allied units already on them, has been completely fixed. Some games handle this by showing both units on the tile at the same time, having the non-moving unit “step to the side” to let the unit pass. Currently the unit will just walk “over” any unit on the current tile, which while not as pretty, it gets the point across.

The biggest addition so far in version 0.1.3 is the Weapon system. Weapons can be equipped by a unit and will increase stats, usually the attack stat. When a unit attacks, their weapon will show up during the attack animation. Three different attack types are currently implemented:
Melee attacks make up the majority of weapon attack types and allow the unit to attack units they are directly next to. Melee is the default for units meaning even without a weapon all units can perform an unarmed melee attack.

Long Melee attacks are from weapons like Whips and Polearms which can attack with a range of up to 2. They are similar to melee with the added bonus of being able to target a unit up to 2 spaces away. Certain Long Melee weapons will be able to hit every unit(max 2) in one direction(should there be two units lined up). These will require piercing weapons such as most Polearms. In this scenario, for example, a Whip would only hit the first target and not the second.

Ranged is for weapons like Bows, Crossbows, Wands, and will also be used in most spells. Ranged is the only attack type that allows for diagonal attacks as it allows for full 360 degree targeting. For now there is no minimum range, i.e. Ranged weapons can attack at melee range up to whatever their maximum range is. This might change in the future. 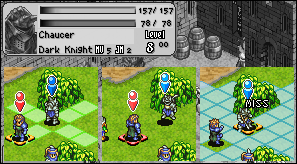 A Long Melee attack by the Dark Knight using a Spear. (I cropped together three screen grabs to show the process, read from left to right, he ended up missing

A fourth type of attack is currently in development. It expands upon the Long Melee to give certain special weapons a range of 3 with all the same benefits of Long Melee.

In other news you may notice that a large majority of the graphics that appear in the screenshots, namely the units, are from intellectual properties not owned by myself and are simply placeholders. The way I have designed the engine allows for the easy replacement of these resources with new ones using a specific sprite sheet layout. This allows for an artist to come on and know exactly what format and size the sprite sheets are, how many frames are needed and the overall style. Check on the top of this page if you're interested.